Nerkunam Dr. S. Sankar is one of the well-known kanjira artists in the field of Carnatic music. He started playing kanjira at the age of 12; he is the last and prime disciple of kanjira Maestro Sri G. Harishankar from whom he learned by gurukulavasam (living & studying with his teacher). He traveled far and wide with his Guru Harishankar. N.S. Sankar started his initial training in Carnatic percussion from Sri P. T. Subramaniam and Sri Shrivanchiyam K. Gopalan. He was born on June 10, 1979 to Shri K. Suriyanarayanan & S. Vasantha in the native Nerkunam village in Tamil Nadu, southern India and later settled in Chennai for his studies and also for music. He is an ‘A’ Grade artist in the All India Radio for kanjira. He has earned M. A. (Rhythmology) , M. Phil degree from the Department of Indian Music of the University of Madras. He has also earned Ph.D in music at QMC Chennai. He started an organization called KALAIMAMANI G. HARISHANKAR ADMIRER'S CIRCLE TRUST after the demise of his guru G. Harishankar for which he is the Convener & Secretary. Every year in the month of February, he organizes a Remembrance Day to G. Harishankar. On that occasion, we are honoring a senior musician with the award called G. Harishankar Memorial Award. He has a wealth of experience accompanying great musicians including, Madurai Sri T. N. Seshagopalan, Sri T. V. Sankaranarayanan, Kadri Gopalnath, Sri O. S. Thyagarajan, Naively Sri Santhanagopalan, Sri Sanjay Subramaniam, Sri T. M. Krishna,Smt SudhaRagunathan, Smt Bombay Jayasri, Sri Ashok Ramani, Smt. Nithyasri mahadevan, Dr. Sri T. K. Murthy, Trichy Shankaran, Guruvayur Sri Dorai, Sri Srimushnam Rajarao, Mannargudi Sri Eshwaran, Thiruvarur Sri Bhakthavatsalam among many others.

He has won the All India competition conducted by All India Radio - Chennai in 1999 and was honored with the title Asthanavidwan from Kanchi Kamakoti Peetam. Honoured with the prestigious 'Yuvakalabharathi' from Bharathkalachar. Selected as the 'Best Young Artist' by Eyal Esai Nadaka Manram 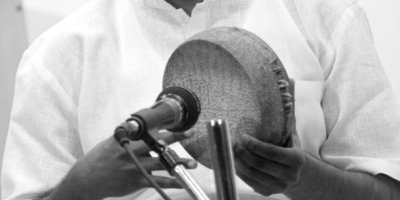 This course will provide a great head start to Indian Percussion and the basic lessons in playing this unique instrument. This well-structured course consists of around 10 modules that educates students about the fundamentals of Indian carnatic percussion and trains the students in playing complete Aadhi Thalam lessons on the Kanjira. On completion, students will have a good understanding of the Indian rhythm system and will be ready to play a simple solo in Aadhi thalam on the Kanjira..
40 slots left

In this course, students will learn complete Kanta chapu (5 beats) and any two of the 35 thalams. This course also focuses on teaching the students the advanced mathematics involved in Indian Percussion, Korvai Composition techniques and advanced song accompaniment techniques. This course also involves Korappu training. On completion of this course, students will be able to perform solos with Mridangam or accompany complex songs in Aadhi, Rupakam, Misra Chaapu thalams and Kanta Chapu thalams in both Vilamba kaalam and Chowka kaalams..
40 slots left

In this advanced konokol course, students will learn complete Kanta chapu (5 beats) and any two of the 35 thalams. This course also focuses on teaching the students the advanced mathematics involved in Indian Percussion, Korvai Composition techniques and advanced solo performance techniques. This course also involves Korappu, advanced Arudhis and Muthaippu training. On completion of this course, students will be able to perform solos in Aadhi, Rupakam, Misra Chaapu thalams, Kanta Chapu thalams and any two of the 35 thalams in both Vilamba (Slow) kaalam and Chowka (Fast) kaalams..
64 slots left
Back to Faculty listing