Guitarist, Band leader and Musical Director for Carnatic/Jazz Rock Quartet ‘Jatayu’. Honours student at Swarnabhoomi Academy Of Music (SAM). Guitarist of now Defunct Band ‘Kurangan’. Guitarist for India’s Largest World Music Ensemble - The Casteless Collective. Western Harmony and Guitar/Ukulele Instructor. He has trained over 200 students in various forms of Guitar and Western Music as part of Life Art Education (LEA), Mahindra World School, and Maharishi Vidya Mandir in Mahindra City Naahar Public School. A highly innovative professional, Sahib Singh is a one of a kind guitarist who brings in a unique rhythmic style of playing with his percussive funk guitar technique. Having studied in India’s best contemporary music school, he got the exposure and experience that helped kick off his musical journey as a performing artist. The time spent at SAM helped him develop his ability to seamlessly merge various styles of music, without forcing it onto each other. This ability led to the birth of ‘Jatayu’.An experimental stylist, he likes to play with the myriad possibilities of sound creation. Performing live since 2010, Sahib has played 500+ shows all over the world.

The Western Guitar course is aimed at creating a versatile performer. The objective of these courses is to learn different genres and styles of music like Rock, Blues, Funk, etc., on the guitar that enables a musician to use these skills both in sessions playing or on the stage. An understanding of these styles not only helps students in pursuing independent music but also makes a student a complete guitarist. The course can take in students at very basic levels and then progress them to more advance concepts and techniques over five distinct levels of learning..
136 slots left 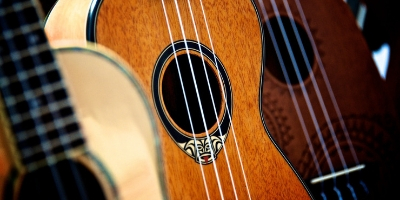 This course gives the students full exposure to the unique sound and style of the Ukulele. Originating from Hawaii, the Ukulele is an ‘easy to learn’ instrument and due to its size lets you carry it anywhere from campfire jams to office parties. In this course, students will learn to play Chords, Scales, Strumming and Improvisation techniques on the Ukulele. Students will also be trained in the Western classical harmony and music theory. This course will also help the students to develop and learn various Hawaiian rhythms and sounds from that region..
32 slots left
Back to Faculty listing