Ramanan is a versatile drummer and percussionist who plays for multiple bands and artists. He started showing interest towards rhythm at the age of 2 and played his first show at the tender age of 3 as a part of his father, Playback Singer B.V.Ramanans orchestra. He started learning drums at the age of 5 from Mr. Shankar, a well-known Drummer from Chennai, Mr.Arcot S.Mani, a veteran percussionist, and also Mr. Gopal, Mr. G.Karthick and Mr. G.Jagan. Apart from Drums, he has also undergone tutelage in Mridangam from Shri Sukumar and Shri M.S.Varadhan. With his passion and love for the instrument, he taught himself to be adept in the genres of Rock, Blues, Progressive Rock, Progressive Metal, Hip-Hop, R&B, and Soul. Apart from the Drums and Mridangam, he is also proficient in the Cajon, Rhythm Pads, Bongos, and Conga. He has performed with artists in the likes of Padma Bhushan S.P.Balasubrahmanyam, Padma Shri K.S.Chitra. He has performed with multiple award-winning Carnatic Progressive Rock band, ‘Agam’ on several occasions. Hes the drummer for Staccato, a Chennai-based Contemporary Carnatic band that was the only band from India to play at the London Olympics 2012. Hes also the drummer for Amogh & The Homies which is a Hip-Hop Rock band that won an All India band hunt conducted by RedBull. He also performs with other prominent and renowned bands from the city such as Non-Violinist Project and Third Eye. He has performed with well-known artists from the Indian Film Industry such as Playback Singer Saindhavi Prakash, Playback Singer Diwakar Santhosh, Music Director Manikanth Kadri, A.S.Ram and is an integral part of his Father, B.V.Ramanans orchestra.

A versatile Drummer and Percussionist, adept in a myriad of genres such as Rock, Blues, Progressive Rock and Metal, Hip-Hop, R&B. Performed with world renowned artists ‘Padma Bhushan' S.P.Balasubrahmanyam and 'Padma Shri' K.S.Chitra on several concerts and tours. Performed with his band Staccato at prestigious events such as the Gollapudi Srinivas Award 2018 and The Hindu’s November Fest 2018.

This course helps the students master in Cajon by incorporating techniques from different genres of percussion like Konnakol from Indian Percussion, Song accompaniment techniques from Western percussion and so on. This course also involves a training on how to play as a part of a band and in musical concerts of different genres. On completion, students would have a complete knowledge about the Percussion art and would have achieved a great control over the instrument. .
80 slots left 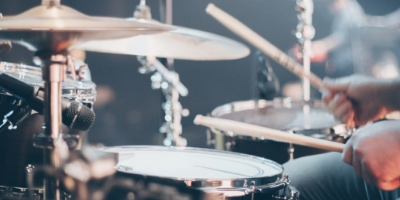 The beginner drum course focuses on the fundamentals and basics of drumming while keeping a musical context. This course aims at teaching the students the stick techniques, rhythm reading, rudiments, improvisation ideas and coordination exercises. Upon completion of the course, the student will have the basic technique to develop their own musical voice and expression through rhythm on the drum set. .
96 slots left
Back to Faculty listing